On November 7th, 1969, Sister Catherine Cesnik (or Sister Cathy) left her apartment between 7 and 730 PM to run errands. She shared this apartment with her roommate, another Catholic nun. She planned to stop by the bank, a bakery and a department store to buy a gift. She never returned. Worried, her roommate contacted two friends of theirs, two priests from Annapolis, to help her look for her missing roommate.

They came quickly and all of them went out in search for her. That night they found her vehicle, a green Ford Maverick, parked illegally and conspicuously. It was parked across the street from the lot where her assigned parking space was. Inside the car, which was unlocked, they found a box of dinner rolls from the bakery, some kind of fibers, and leaves and twigs on the front seat. And branches hung on the vehicle’s antennae. No Sister Cathy.

Police were called and the official search was on, but there was no sign of her. The search involved many officers and k-9 units. The neighborhood was canvassed. No one saw what happened to her. And no one knew where she could be. The running theory at the time was that she met with foul play in parking space on her way back into the apartment. The kidnapper/carjacker was thought to be someone who lived in the area. Police believed the suspect had to drive the vehicle back there, so that they could walk home. Witnesses stated that the car was there as early as 830pm. Surely they found it odd to be parked there, but likely had no idea it was involved in a crime. Sister Cathy left her home as late as 730pm. So whatever happened to her, happened very quickly, most likely within an hour.

Then that was it, for months. Until one day, two hunters, walking in an area near a dumping ground, in a part of Baltimore county just outside the city limits called, Halethorpe, found her decomposing body. They found her on January 3rd 1970. An autopsy revealed that she died from blunt force trauma to her head. Two large fractures were found on the back and on the side of her skull. Because of the amount of decomposition, it could not be determined if she was sexually assaulted. This would have given police something else to consider regarding the motive behind her killing. 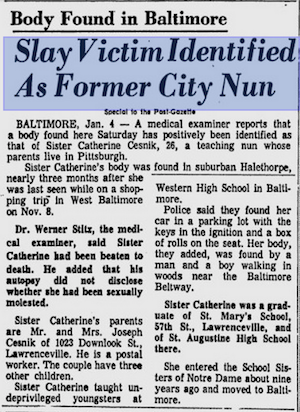 The body was found during the middle of a strike by pressmen from all three local daily newspapers. So there was little to no news coverage of the finding of her body. The strike wouldn’t end for another 2 months. The finding of her body only solved the mystery of where she was. What happened to her and why was still unknown. I could find no information regarding any other speculation about who killed her and why. 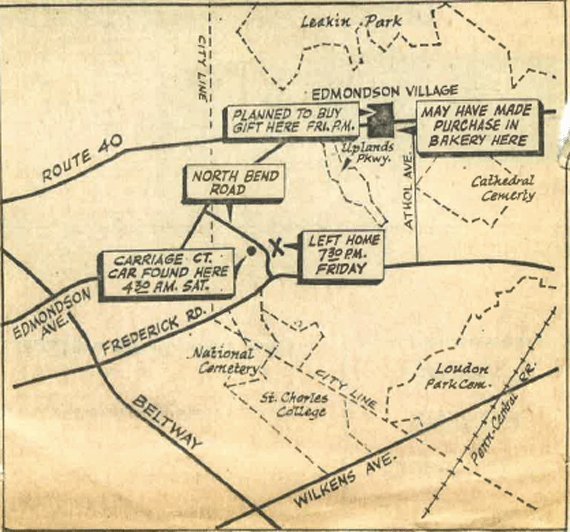 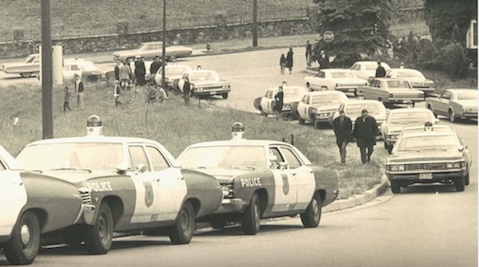 Until 1994 when two women came forward to tell their story of being victimized by a local catholic priest, and mentioned being brought to the body of Sister Cathy by this priest and warned/threatened. One of them even mentioned seeing maggots on the face of the her deceased body and trying to wipe them away. Police in 1994 were skeptical at first, because Sister Cathy was presumably killed in the winter and dumped during cold weather. Notes from the autopsy confirmed that the season was an especially warm one and that maggots were present in her remains.

Then a local gravedigger, came forward and told of how he was asked to dig 12 x 12 foot hole a couple years prior, at a local church where this priest worked. And in that hole the priest buried two truckloads of boxes. The gravedigger said that between truckloads, he snuck a peek at what was inside the boxes and saw among paperwork and cancelled checks, photos of children. Photos of nude children. That gravedigger did what he was asked. He covered the buried boxes with sod to hide the location. But felt that one day he would need to show someone where this area was. So, he drew a map of the area, marked the spot on the map and placed it in a safe deposit box. Until finally he decided he should come forward with it.

The boxes were unearthed. An officer involved in the investigation, recently stated that the photos were found at the time of the unearthing by police, but then later disappeared from evidence. News reports of the time reflect nothing about what was found other than that it was paperwork.

What could any of this have to do with Sister Cathy?

The night before Sister Cathy disappeared, a former student came to her apartment. She was there to talk to and catch up with Sister Cathy. The student told Sister Cathy that the abuse at Keough school where she attended was still going on. This was not shocking to Sister Cathy, as she had been told about this during her tenure there. Students reportedly came to her to help them hide from one and then later two abusive priests. Sister Cathy often helped the students by making them unavailable when the priests requested them from her classroom. Sister Cathy was saddened, of course, that it was still occurring after she had left and had promised to something about it. I found some indications that she had told the priests shortly before this night that she was going to report them. Or that they found out that she had already reported them.

Suddenly, the two priests burst into Sister Cathy’s apartment unannounced and shouted at her and the student. One priest told the child that he knew why she was there and threatened her and Sister Cathy. They soon left. The next day Sister Cathy vanished.

Who was this priest who threatened the student? Father A. Joseph Maskell. The same man who brought the two women, as teenagers, to the dead body of Sister Cathy. The same man who urged the gravedigger to hide two truckloads of boxes in a graveyard. The same man who was at the center of an unraveling sex abuse scandal. He was also the Police Chaplain for the MSP, MD NG, and the Balto County PD. The same county police agency who were tasked with investigating the murder of Sister Cathy, since her body had been found in their jurisdiction.

The murder investigation was reopened in 1994 and detectives attempted to speak to Father Maskell. He never made himself available to them, however. He dodged them until later that year when he disappeared. Only to reappear in a private medical facility complaining of fatigue and then later pop up in Ireland. Once he was in Ireland and without much else to go on, the police’s investigation stalled. Or in the words of one of the retired detectives of the day, they were told by higher-ups to drop it.

Much later, the Catholic church all but acknowledged Father Maskell’s role in the sexual abuse of approximately 30 students. In 2010 they paid one victim $40K in a court settlement. The details of the sex abuse reveals to the involvement of many other men, including uniformed police officers. You see, aside from being the police chaplain, Father Maskell was also the brother of a well-known hero cop who’d survived a harrowing shootout. He hung around cops, he talked like a cop. He was also, what we would call it in the policing business, a squirrel. An unhealthily obsessive police wannabe. He often went on ride-a-longs with cops. Jumping out with them to “assist” in chasing down fornicating young people. He carried a gun with him often. He had a police scanner and would monitor the calls for service. When something of interest happened, he was known to drive to the scene, as if responding to the call himself. He was a squirrel. This control-seeking wannabe was also an abuser of young teenagers. And quite possibly a murderer.

But we may never know for sure what happened to Sister Cathy. The department responsible for investigating her murder, the Baltimore County Police Department, likely had good reason not to delve too deep into it. Time and again as this case is reopened and then left cold again, rumors arise that the top brass tell the detectives to back off. And, this happened in 1969, many of the people connected (possible suspects and possible witnesses) to this crime are dead. Father Maskell died in 2001. The second priest involved in the abuse is also dead. Some of of those involved might not be though and have gotten away with murder all this time. Evidence is possibly missing and even if the truth is found, proving it will be difficult.

There is a group on Facebook of former students Archbishop Keough high school who were there when both Sister Cathy and Father Maskell worked there. Several of them are survivors of Father Maskell’s sex abuse. For more information, or if you have any information about this crime. Or if you knew Sister Cathy, please contact them, the group is called, Justice for Catherine Cesnik and Joyce Malecki. Joyce Malecki was also killed around the same time, but that is subject for another possible episode. Also there is a production crew working on a documentary about Sister Cathy. I’m not sure when it will be coming out, but I will keep you updated. Baltimore County Police urges anyone with information about this crime to contact the Homicide Unit's Unsolved Case Squad at 410-887-3943.